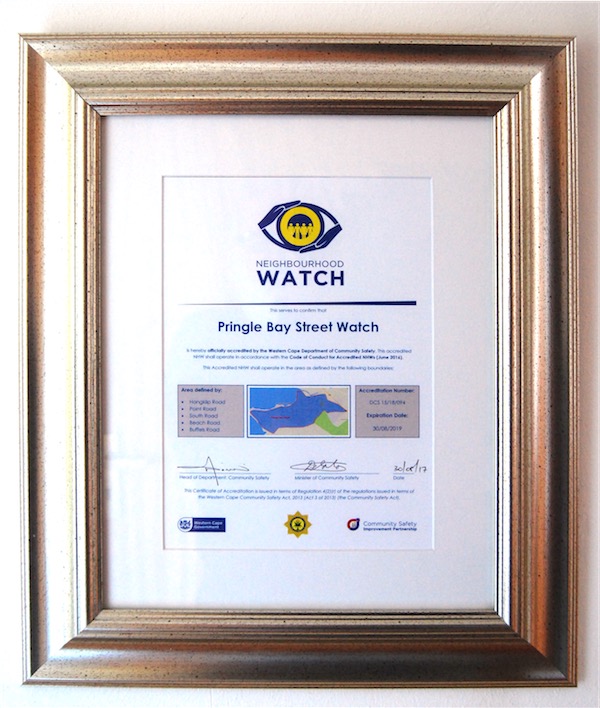 After nearly a year of hard work involving members of the Pringle Bay community, the Pringle Bay Street Watch (PBSW) has received formal accreditation from the Western Cape Government’s Department of Community Safety (DoCS). Representatives from the Watch as well as local SAPS and the Kleinmond Community Police Forum (CPF) joined more than 100 representatives from other Western Cape neighbourhood watch and related organisations at a ceremony in Goodwood to receive the accolade this week.

Neighbourhood Watches came from as far afield as Franschhoek, Atlantis, and, of course, Pringle Bay. There were four Watches from Harare, Khayelitsha, including the Monwabisi watch, and one from Nyanga. A new Goodwood NHW was also there to claim recognition.

Those doing the honours were the Minister of Safety and Security Dan Plato, the Chief Director of Community Safety Simeon George, Mr Richard Bosman, Executive Director of Safety and Security for the Unicity, and the recently appointed Chairman of the Goodwood CPF John Ross. Advocate Jerome Norris, who has advised PBSW throughout the process, was master of ceremonies, and Miss Ayesha Fortune, Director of DoCS Accreditation Department was also present.

A total of 23 new NHWs qualified for accreditation, 21 of which had representatives at the function to collect framed certificates and starter packs.

We aren’t here for ourselves, we are here for the people. Min. Dan Plato

NHWs Need The Support of DoCS

John Ross, a former policeman, emphasized the importance of accreditation and the value of support from DoCS. He said it was particularly important in areas where there were gang-related problems.

NHWs, CPFs, SAPS, and DoCS Must Work Together

Ayesha Fortune said it was essential for the CPF, NHWs, SAPS, and DoCS to have a “healthy relationship.”Ultimately, they were working towards making NHWs ‘capable bodies’ that would help to build safe communities”, she said.

She also quoted several legal obligations including the fact that all NHWs are bound by certain standards and a Code of Conduct.

NHWs are the Eyes & Ears of SAPS

Minister Plato pointed out that NHWs are a “legal entity” operating within the Act. He discussed the roles of SAPS, CPFs, and NHWs and emphasised the importance of them all working together.

He said NHWs were the eyes and ears of SAPS and so it was vital to report all incidents to the police. The CPF, he said, play “an oversight role”.

While “everyone” was “shouting at SAPS” to do more, Plato pointed out that it was impossible, for instance, for SAPS to guard each and every school, clinic, and hospital.

Schools, clinics, and hospitals must belong to us. Min. Dan Plato

For this reason, NHWs were beginning to guard schools and trying to stop vandalism and increase school safety, he said. But it was impossible to pay each and every member of the NHW a stipend for the work they do. However, DoCS was prepared to fund projects.

Min. Plato drew attention to those who don’t follow the legal NHW route, but rather prefer to act as vigilantes.

“We cannot afford this,” he said, adding that those acting in the capacity of neighbourhood watch cannot operate as a police officer. It must be done according to the law.”

It is vital to act in a responsible manner within the confines of the law. Min. Dan Plato

The Fight Against Gangsterism

Min. Plato said that the strength of NHWs on the ground needs to be “solidarity”:

He said there was currently too much infighting and personality clashes in both CPFs and NHWs.

The CPFs and NHWs belong to the community and there must be no politicking. Min. Dan Plato

He also drew attention to the new White Paper that will give DoCS legal control over CPFs.
Advocate Norris had the last word stating that it would be a long road to eradicate crime. “But we can reduce crime,” he said.

We need to show a united force against crime. Adv. Jerome Norris